The route climbs the portion of the wall to the left of the corner of the historic and beautiful (and classical) via "I Lunghi Fiori d'Acqua" traced by the "Mago" (Maurizio "Manolo" Zanolla) thirty years earlier, during his stay working of loosing and securing the walls of Sperlonga. A homogeneous way in difficulties, usually between 5b and 6a, with only one more difficult pass at the start of the first pitch. The choice of the name derives from the genesis of the opening. Originally Ferruccio and Mirko (known to most as "The thief of Baghdad") have identified the line of descent and ascent of the street. In April of 2009, on a hot sunny day, our team fell in double, equipped with traditional nails, the stop on the terrace at the end of the first double and then in the second fall lost in the void and were forced to climb with the self-locking on the ropes . During the ascent, as soon as the wall was "touched" again, they could try the athletic passages, beautiful and never banal, of the two thirds of the first shot. The sun prevailed and they left the game. Their confidence was taken away by treason by Riccardo, who after a few months of waiting made the "theft of the street" ....... So in this story the thieves were so many! But all friends and happy!


You cross the belvedere fence at the point where it ends. You go down two meters to a large pine and find a chain of descent next to the trunk of the pine. From here there are two doubles, both 40 meters long. With the first you reach a comfortable terrace. Attention here !! Although the first drop is perpendicular, with entangled cords (perhaps from the use of the descender), a joint could be generated on the raised upper part that could force them to ascend along the same, only to free the strings from twisting. With the second double you arrive slightly to the left of the base of the corner and stop right on the edge using a stop across the "Mare Nostrum". 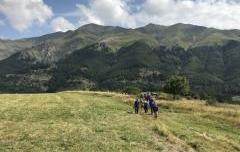