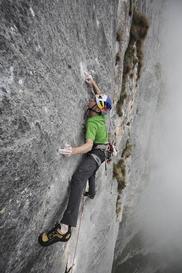 
Super via di Manolo opened completely from below and then later released with difficulty up to 8c + / 9a in the 4th shot. This is certainly the most difficult climbing route in Italy and in Europe it is only surpassed by Orbayu (8c + / 9a, Naranjo de Bulnes) and at the same level of Silbergeier (8b +, Rakiton) and WuGu (8c, Rakiton). The first two pitches (7c + and 7c) were opened and freed already during the first ascent and in self-safety while the last 2 were released in August with difficulty, the first of 8b / b + and the second, which corresponds to the fourth and last throw, of 8c + / 9a. The road climbs without overhanging by a meter and the two final pitches, as well as the farthest ones are protected with very distant split, they are very spectacular because they take place on a wall and with very few notches very small and distant from each other all in extension and with feet in adherence. Until now there have been very few repetitions all by roped formed by the world and Italian climbing elite.


From the village of Aune you take the forest road following the trail n. 810 m, the road ends and the path begins when you turn left, leave it and continue in the valley (small stone) to the base of the aqueduct by qiu cross right on the lawns until do not end up on a very sloping shoulder from here, which is the attack of the street "You need to be quick to describe the clouds" continue towards the center of the wall for 30 m ATTENTION VERY EXPOSED, USE THE FIXED CORD ALREADY PREPARED