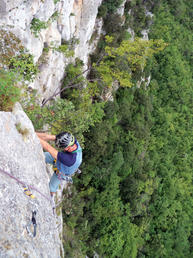 Modify Multi-Pitch Route
Description:
The SX pillar of the north wall of Perti is one of those geological structures that have always been visible and have never been exploited by the climbers. The famous streets that interest this portion of Perti are well known, such as the famous "Gibba", by Bruno and Ghiglione, dating back to '78, or the more recent and classic "Consolando Consuelo" by Pizzorni and Rolando, which exploits a splendid dihedral /chimney. The pillar of SX is now crossed by a modern line that closes a bit 'the chapter of the recent lines born from year to year from 2003 to today. 2011 is finally the North-End season ... at least for the opener of this aesthetic, even if it is short! The difficulties that characterize it are certainly not impossible, and yet it is a multipitch anything but to be underestimated, which needs experience for those who want to travel free and that requires a good level of sight for those who try the on sight. All this suggests a route for experts who want to enjoy this intense and rather aerial treat in its upper part, just where the key to the route awaits ... Characteristics of the Way Nord-End is a short four-length route that attaches the aerial left portion of the wall. The first two "approach" shots, articulated with very technical steps with respect to their degree, on a vertical plate, lead to the base of the SX pillar. It was identified more as a border for the magnificent and well-known chimney of the current "Consolando Consuelo" street, rather than as a structure in its own right. Nord-End attacks the overhanging profile in its most aerial point and is held on the wire up to its summit. The road then continues on the edge, always airy, chasing the boundary up to the peak SX della Rocca. From the same, in a few minutes it is possible to reach the top of the mountain, near the cross, with a short trail.

Satellite Global View
Access:
Via the Genoa-Ventimiglia motorway, exit at Finale. From the toll booth, continue to the main road and continue downhill on the left towards Final Borgo. Arrived at a roundabout ground level you turn left through the bridge in front of the historic door of the hamlet. Continue to the left, on a paved road towards Calice Ligure. Continue with the torrent to the left and the houses to the right, for a few hundred meters, long and in moderation, until you meet the sharp turn right uphill towards the Rocca. Go back up this deviation, passing several bends, up to the point where a ban restricts access to the valley. There is space to park. The continuous asphalted and winding road for a few km to the point where it ends, in the small plateau between the north wall of the fortress of Perti and the south of Montesordo. This stretch can be walked downhill in about fifteen minutes. It is customary for climbers to continue in the car arriving at the open space in 5 minutes. Given the discretion of the climbers, the inhabitants of the valley are tolerant, if they are made of respectable parking and does not get dirty everywhere! However, access to non-residents vehicles remains officially prohibited. Approach (9'-10 ') From the dirt track at the base of the north wall, take the path that goes behind the fountain and the picnic tables to the left. The track is marked with three red FIE fitting dots. In a few minutes you cross a first junction and continue to SX, (omitting the track that would lead to the historic corner on the right). Shortly after you reach a second fork, you leave the main path to the left and continue instead to the right, on a false floor, up to a sort of small clearing. At this point they attack most of the northern routes. In front you can see Via col Vento and immediately on the left the trail that leads uphill, above a rock, to the attack of Nonno Dino. Still on the left, you can see red siding marks on a track that runs along a rocky step. From it we descend to a new track and, after a few tens of meters, we can see DX, in the first corner near a rock, an open cave from which the Panta Rei road starts. (On the outer edge of the antrum the red-painted name is visible). Leaving aside this attack you continue to SX on the path, you pass a difficult step downhill on a log and continue until you reach a fork. You leave the main path that goes straight ahead and you take a very steep track that goes up to the right (faded orange arrows). Continue until you reach a new fork: continue to the left and leave the trail that goes up steeply to the left. The path with a few turns then arrives at a dirt track. On the right of the North-End the Consolando Consuelo and the Via Anna Pagnini start. (Names written to paint). You climb the first 10 m of the Consolando Consuelo road (or the aforementioned SX channel on natural protections), and then, when this crossbar on the right continues instead upright towards the very evident pillar on its head (written "N-End") "). The departure of Nord-End is substantially 10 m high to the left of Consolando Consuelo.

Descent:
From the S4 stop of the last pitch you will cross to the right for a few meters and exit at the left. - If you continue on the left downhill, you will follow a trail through the forest with steep stretches leading to the main path. Continue on the latter still on the left down to the parking lot. - If you continue on a steep uphill slope, you will get to the summit cross (book of relations) in a minute. From there go down to the left following the path marked FIE (three red dots) up to the parking lot or from the cross you go back until the previous descent described. 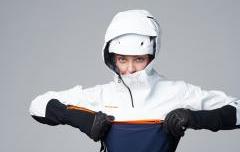