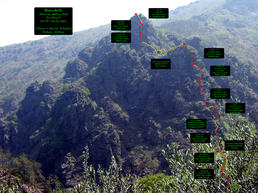 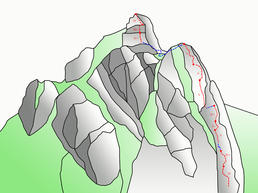 
The new Via Andrea e Paolo is a climb that encompasses a little all styles: resting and vertical plates, small overhangs, blades, edges, corners, restoring ... There is something for everyone. It is a climb that combines the merits of a classic route with those of modern optics. This is the route with the greatest development in the context of the Genoa area, which is bolted in a plaisir manner, with a desired degree that is rather affordable to the average climbers and mountaineers. It is a really appreciable climb that starts in a wild forest, in the first shots, almost discontinuous, and then attacks a pillar far from trivial. Shooting range the line becomes more and more airy and the movements of the way are becoming more elegant and never obvious. After having conquered the forepart, through a few meters of foot connection, you reach the attack of the last tower that leads directly to the summit. The show is fascinating on the spire, in the presence of rock towers on one side and the enchantment of the blue sea on the other, almost hidden from the east ridge, and yet present. In June 2003, descending from the front of the Cima Mondini (Maritime Alps), Andrea Maria and Riccardo Rudino had a very serious accident. Making a double Andrea fell from the wall. Riccardo tried to stop the fall by force, but as a result he was torn off the rock. He broke several ribs, a shoulder and a hand in an attempt to keep his partner alive, but there was nothing to do. In the following period, even if sad, Riccardo began to go to the mountains with another colleague, his friend Paolo Salata. The latter had learned the rudiments of mountaineering thanks to a CAI course and was enthusiastic about it. Riccardo and Paolo spent a year climbing in every possible moment. The two friends often talked about opening a path and dedicating it to Andrea, very dear to both. One Sunday, while they were facing the historic lines of the Rocca Sbarua, as always together, Paolo did not feel well. An evil as dark as it was unexpected took him away in a month. The situation in which Riccardo found himself is indescribable. Only the passage of time allowed the climber a few moments of non-serene stillness, to be able to think of something that could remember his friends. "I had never been to Sambuco [Val Cerusa, Ligurian Apennines, Genoa, ed] and one day I climbed up to those rocks, alone, without rope, without anything, and meter by meter, I arrived at the top, without making me account of what I was doing. Only when I returned home did I realize that the rock and that path, so wild and wonderful, were something that would have bound me to them forever ". Riccardo returned to climb the new line first with his friend Saverio, a novice rocker, and then with Maurizio, a long-time climbing partner. With self-made anti-reconstruction bars and tapes, he organized a first sporadic nailing of the five pitches present. In April 2007 Riccardo contacted Christian Roccati and Michele Picco in order to achieve a modern nailing and to spread the route. The three climbed the new line together and talked about its history. In October of the same year a quartet composed by Roccati, Picco and also by his friends Ernesto and "Dino" Dotta found himself for a primary work on the line. The first couple applied to the upper part while the second attacked the first three shots of the route, which in the current year now counted by 7 lengths. However, the works were postponed for a long time for two years. Christian Roccati in September 2009 contacted Riccardo and Michele again to inform them that he would realize the work together with partner Ernesto. The two, thanks to a continuous weekly work under all time, equipped the way with a renewed logical line, opening a series of new shots on homogeneous difficulties. Ernesto and Christian straightened the way in a modern perspective, choosing to go where they could protect the line with elegance with modern fixes on solid rock but respecting the key steps of the original route. While the couple primarily cleaned the access track, "disgusted" the wall and organized and implemented the nailing, the good Riccardo redeveloped the paths, normally used by hunters, by cleaning and resignation. Michele could not help directly by providing a good part of the initial material. On October 13, the new Via Andrea e Paolo was repeated free for the materials test by Christian and Ernesto who added further different anchors during the ascent. Two days later was added the eleventh shot that concludes the current climb coming directly to the top of the Rocca du Fò, the fortress of the Beech. For more info: http://www.christian-roccati.com


Via the Genoa-Ventimiglia motorway, the Voltri exit is reached. From the toll booth, go down to the coastal road to the village and turn right in the direction of the same. Continue past the hamlet of Voltri and at its end, just after the last two houses, you encounter a wide open space that distinguishes the terminus of the number 1 bus. Here you set off to the right uphill the provincial road to Fabbriche that you take. We proceed along the narrow and winding road that crosses the town. Continue until you pass the pylons of the motorway and immediately meet on the left in a steep descent "via Sambugo". You take this secondary branch and immediately meet a fork in the road. Leave the DX road for Loc.Sambuco and continue on via Sambuco to SX. We proceed first on a level and then uphill through the hairpin bends. Some houses meet at a hairpin bend to the right and continue on a false floor towards the right. The mountain road loses a bit of altitude and then starts climbing again, arriving at its end at a clearing with private rustic box. You reverse the square and park along the downhill road to the left (right up) in the imminent single small space (parking for 2 cars). If it is busy, it is advisable to go further downstream to not annoy the premises that have been very tolerant with climbers, hunters and hikers to date. Maximum education is therefore recommended. From the open space where the road ends you find a bridge with FIE signals, which crosses the torrent on the right, which is left out, and a trail of path that goes up straight, next to the last box on the left. Sometimes in the evening there is a small barrage of logs piled between the rock and a canopy, so as not to let goats graze. If you find it, be very careful and put it back in place. The path immediately faces a short climb where the first red stamps appear and then crosses a field of heathers to the right. We continue first on a false level and then we pass two consecutive strongholds and a steel cable. We continue along the coast until you reach a small tributary along a ford. Continue until you reach a second on the main stream, the Rio Gava. The trail signs lead to circumvent a large boulder clockwise, thanks to a catwalk. (Often the floods move it and it is therefore necessary to avoid with I steps the boulder counterclockwise, meeting the trail marker a few meters later). The track continues parallel to the river with more difficult steps. The trail leads under the cliffs of the Faggio fortress and continues with rare steps of I and some ups and downs in the bush until you reach the channel at the base of the obvious dihedral on which it attacks the way. The name "Via Andrea e Paolo" is written in red paint. (20 minutes)


From the top, continue on foot following a trail that leads to the left. Go down to a grassy shoulder and go up behind it towards the right (be careful not to continue downhill to the left). The trail continues flat for a few meters and, from the shoulder, begins to descend through an intricate fort of heathes about 25 m shortly after a clearing that you cross. You reach a hunting post and pass it to the left. The path, increasingly steep and on a sort of scree, leads through the woods and wades a stream towards the left. The track continues on a small ridge that then reaches the last meadows up to the ford of the main stream. All that remains is to cross the bridge again and follow the path of the first leg to the right. In the case of flooding it is possible to take the small 5-6 meters of the first degree on the right, signaled in the approach, which bypass the large boulder leading directly on the path to the right. It is also possible to get in double from the street but it is not recommended at all. Escape routes From the stops of the first, third and fifth shooting you can return to the attack by going down the DX channels with due care. From the start of the ninth throw, which is the first of the final pillar, you can find a track towards SX. You can continue on it for about 7'-8 'until you reach a scree. Going down to it until its end you find the trail red return stamps. From the tenth pitch you can get around the last length on the right and still conquer the summit.