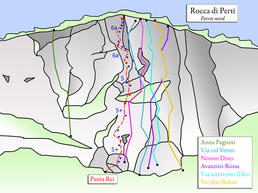 
After a month from the opening and rewinding of the new Via Andrea e Paolo, to the Rocca du Fo ', in the Ligurian Apennines, Ernesto Dotta and Christian Roccati found themselves creating a new project that, like others, had been in store for some time. A portion of the north wall of the Rocca di Perti was still unexplored, and an obvious natural line had already captured the attention of both. Ernesto was on the other side of the great work done with the other members of the team Vecchie Beline, his companions, who on the same wall opened, in previous years, a series of beautiful lines. The same had been repeated and maintained, one after the other, a few months before Panta Rei. The project line has been identified, cleaned up, equipped several times, between the end of 2009 and the beginning of 2010, and finally called "Donkeys in the night". Part of the works took place concurrently with some recurrences related to the life and the departure of "Dino" Dotta, father of Ernesto. During the opening, a very intimate atmosphere of memories and introspection has been mixed with the geography of the new line, which passes, distinct and parallel, next to the "Nonno Dino" street. In relation to the many emotions and afferent thoughts, the itinerary has been renamed "Panta Rei", ie "Everything Flows". At the attack, in the grotto under a large boulder, is also fixed a plaque with the name in Greek and the quote of the aphorism attributed to Heraclitus, which expresses the concept that generates its name. "You can not descend twice in the same river and you can not touch twice a mortal substance in the same state, but because of the impetuosity and the speed of change, it disperses and collects, comes and goes." (Heraclitus). After the first integral release, some resin products have been added to the way, both from the bottom and from the top, to avoid long unprotected sections, and to limit the objective risks. Panta Rei is therefore an "alpinistic" climbing route, elegant and not to be underestimated. This is a hybrid itinerary that includes different styles of climbing, both modern and classic, on limestone Finale. The road is only partially equipped and was created with the aim of allowing a bit of adventure to those who already know, or want to learn, to protect a climb. The path, starting from a small chimney in a small cave, unfolds in a sequence of plaques, dihedrals, bellies, and sideways wings, which are spiked in difficult-to-protect areas, and without taps wherever they can be equipped more easily. path. The itinerary was therefore also designed as a test bench, for those who want an educational line where they can test or improve their own afferent skills, on moderate levels, but absolutely not to be underestimated. Panta Rei is in effect a climb of IV and V grade, fairly continuous and often to be protected, bolted only in the more demanding passages of V above and VI. The first part of the itinerary is simpler but also rather earthy. It will remain so for a good period. The second part is more demanding, but also much more satisfying and exciting. For more info: www.christian-roccati.com


Via the Genoa-Ventimiglia motorway, exit at Finale. From the toll booth, continue to the main road and continue downhill on the left towards Final Borgo. Arrived at a roundabout ground level you turn left through the bridge in front of the historic door of the hamlet. Continue to the left, on a paved road towards Calice Ligure. Continue, with the creek to the left and the houses to the right, for a few hundred meters, long, until you meet the sharp turn right uphill towards the Rocca di Perti. Go back up this deviation, passing several bends, up to the point where a ban restricts access to the valley. There is space to park. The continuous asphalted and winding road for a few km to the point where it ends, in the small plateau between the north wall of the fortress of Perti and the south of Montesordo. This stretch can be walked downhill in about fifteen minutes. It is customary for climbers to continue in the car arriving at the open space in 5 minutes. Given the discretion of climbers, the inhabitants of the valley are tolerant. However, access to non-residents vehicles remains officially prohibited. From the dirt track at the base of the north wall, take the path that goes behind the fountain and the picnic tables to the left. The track is marked with three red FIE fitting dots. In a few minutes you cross a first junction and continue to the left, omitting the track that would lead to the historic corner on the right. Shortly after you reach a second fork, you leave the main path and then continue on the right, on a false floor, up to a sort of small clearing. At this point they attack most of the northern routes. In front you can see "Gone with the Wind" and immediately on the left the trail that leads uphill, above a rock, to the attack of "Nonno Dino". Still on the left, you can see red siding marks on a track that runs along a rocky step. Made a few tens of meters, while the path continues its path to the left, bends to the right in the first corner near a boulder and in five meters you reach the open cave from which the road starts. On the outer edge of the antrum the red "Panta Rei" writing is visible. (10 minutes)


To repeat the Panta Rei route, 10 referrals, different cords and cords are necessary to equip hourglasses and small trees, medium and small nuts and friends, ring-type carabiners and tapes or connecting lines for stops.


From the S5 stop of the last pitch, climb the rocky wall (III ° pass) and you are already on the track. Reassemble 10 but DX coming to a path. - If you continue on the left downhill, you will follow a trail through the forest with steep stretches leading to the main path. Continue on the latter still on the left, up to the junction of departure routes. Continue downhill to the parking lot. - If you continue uphill to the right you get to the summit cross in a minute. From there you go down to the left following the trail marked FIE (three red dots) to the parking lot.