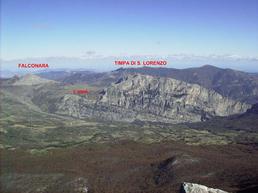 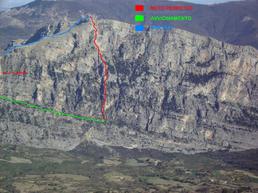 
From the highway SS 653 Sinnica exit at Noepoli or Terranova del Pollino and reach Terranova. At the beginning of the town turn left for Destra delle Donne and follow the main road (keeping the right in the main bivi) even when it becomes a dirt road. Reached a crossroads (Colle di Conca) now in view of the wall of Timpa Falconara, turn right (direction S. Anna), follow the new track parking near the church. From the Sa-Rc highway instead, you exit at Castrovillari-Frascineto, while for those coming from the SS 106 Jonica the exit is Villapiana scalo; in either case follow the SS 105 until the junction for Cerchiara-S. Lorenzo. Once you reach S. Lorenzo Bellizzi you pass it and, ignoring the junctions that lead to the Raganello Gorges and following the signs for Il Falco farm holidays, you reach Colle di Conca. Follow the trail with white-red signs that descend from the church into a small valley towards the balcony on the Raganello, right at the base of the Timpa. Shortly enter the suggestive cove of S. Anna, the characteristic shelf that cuts the base of almost the whole wall towards the valley. Follow the signposts along the ledge but ignore the turn that they then take to get off at the Raganello (the marked trail leads up to the "Scala di Barile"). Continue for easy traces along the ledge, overcome an obvious rocky bell tower about 10m high and the following smooth overhanging wall on the left (yellow and gray streaks). The attack of the street is located immediately after climbing a few meters to the left at a sturdy plant suspended in the wall (signs of paint, little man, cordon) (45 minutes from the parking lot).


From the summit follow the ridge and as soon as possible go down through the meadows towards S. Anna, entering the obvious mule track bounded on the sides by stones and then on the dirt road up to the church (55 minutes). In case of necessity it is possible to lower yourself in halves from the stops along the same ascent line (stops equipped with quick link). 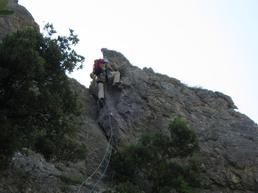 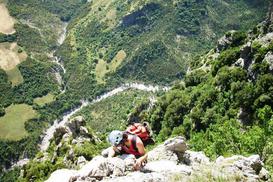 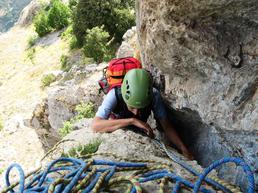 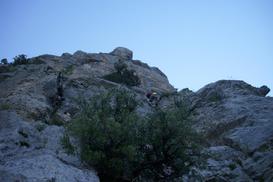 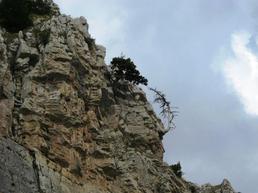