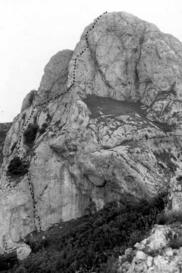 
The path climbs the evident leap that overlooks the south face of Monte Catria, following an ancient itinerary of Castellani - Marra - Vampa (1964) that started from the grassy cengion clearly visible in the middle of the wall. Going up through dihedral, ridges, plaques and so on, it runs all 200 meters. of the Horn.


the possibilities are many; the less tiring is certainly the one that allows you to get into the car (pay attention to the shock absorbers) following the cart road that from Cà la Strada, after Chiaserna, arrives until the Boccatoio and then, once left the car near the first hairpin after the refuge, at the entrance with the path n. 52 (map of the Paths of Monte Catria of the CAI Section of Pesaro) or path n. 103 (Kompass paper sheet 664 Gubbio - Fabriano), go down to the base of the wall for the panoramic side looking towards the village of Isola Fossara; continue on the path up to an obvious saddle that separates the east side from the south side of the Corno, descend by about ten meters climbing on "easy rocks" and then resume the path that will take you to the base of the street characterized by a very characteristic big grotto useful in case of rain (20 minutes from the car). Another possibility is to climb directly from Isola Fossara following the path n. 52 which, going diagonally up the eastern side of the Catria, brings you up to the saddle indicated above and from here to the base of the street (h 1.30). But if you are really pure and hard you can not afford not to climb the ridge starting from the road that goes from Valdorbia to Fossara Island and following the trail 29 (Kompass card) brings you straight to the base of the wall. A path that already alone is those you remember, both for the beauty of the landscape, both for the exposure of this ridge that in some cases even forces you to ride a horse so much is sharp (possibility of insurance) and that combined with climb the street becomes a good mountaineering adventure of all respect. Travel time of the ridge 2 hours - in case of rain on the return it is preferable to go through the path that leads to Isola Fossara, then from here in about 20 minutes, following the road that leads to Chiaserna, go back to the car.


the way is entirely protected both with nails and with bolts, the stops are all equipped with 10 mm bolts. (except in one case with a stop to a tree) and give the possibility of a quick return in case of problems, still bring some friend (up to 5) to integrate the protections and lanyards for stops. It is advisable to use two ropes both for a possible re-entry in double, and to avoid the friction that in some shots can become really annoying. Due to the presence of collection channels on the wall and the wind that seems almost constant, the helmet is highly recommended.


from the last stop follow the whole Corno ridge until you enter the path that leads to the car if you have arrived from above or descend towards Isola Fossara (east) if you have climbed from below.